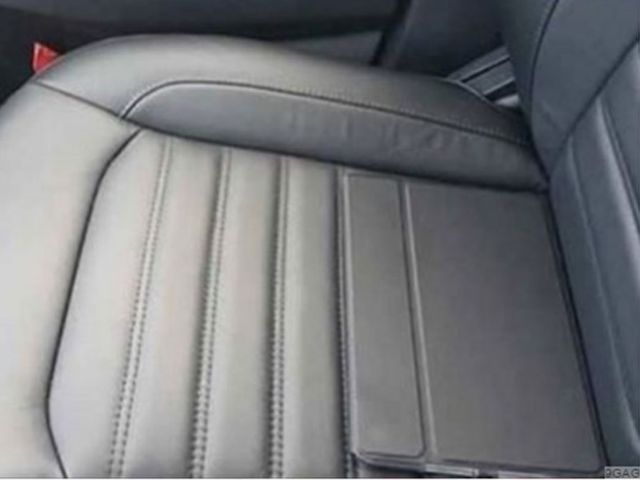 Driving is not about where your car is… it is where your head is.  But, drivers ignore the evidence and buy into an optical illusion when it comes to smartphones.

We can’t find the ipad, which is in plain site (see image) because it blends seamlessly into the upholstery.  Hands-free smartphones encourage a different optical illusion when it comes to safety and mobility. While the phone makes drive time more enjoyable it also masks the cognitive load brought to the driving task.

Cognitive distraction is not a household phrase but it should get more attention in April during “Distracted Driving Awareness Month.”  This annual campaign reminds us that there are nearly 3,500 deaths  and 391,000 traffic injuries each year. These numbers  include all sources of driver distraction, not just phones.  In the past, The National Safety Council (NSC) has estimated that one in four traffic accidents is caused by texting.

It is hard to see cognitive distractions, but optical illusions help us describe it. Like the silver ipad in the image, it is visible, yet overlooked. Drivers cannot imagine the dangers of holding a phone conversation. Their bias, or misbelief, is that they can multi-task and drive safe with hands-free smartphones.

ALL DISTRACTION IS NOT EQUAL

Some background: There are three identified sources of smartphone distraction in vehicles: the first two are obvious: manual distraction, like reaching for a smartphone or texting with it, and visual distraction, gazing at the keyboard or text, instead of the road.  Drivers rationalize that they are compliant and safe if they keep their hands on the steering wheel, and their eyes planted on the road.

Cognitive distraction is the third source of distraction. Put simply, it is the mental workload associated with a task that involves thinking about something other than the driving task . Driving safely requires more than keeping the vehicle straight within two parallel lines.  Put another way, driving safely it is not where your hands are, but where your brain is.

There is a lot of listening we do in our cars, and for the most part we do it safely. We attend to horns, and sirens outside the car…and even to the GPS on our phones, which speaks turn by turn directions. We also converse with passengers. These exchanges seldom result in ‘distraction’ from the road. Should traffic conditions deteriorate outside the windshield, most passengers, with some rare exceptions, will modulate the change. The feedback can be an outright warning, a small gap in conversation or a subtle change in pitch or tone. In any case, the driver gets alerted.

But, it gets more serious. Drivers on a smartphone seldom inform the virtual party at the other end that they are calling from a car. There is an unwritten rule of etiquette to stay connected, even when the traffic conditions get snarly. If drivers get deeply “wrapped up” in a conversation, their concentration can go awry. A conversation trigger may be an emotional topic, or one deeply rooted in disagreement or debate. Whatever, it tends to floods the driver’s other point of concentration, which should be the driving task.

Cognitive distraction is an everyday occurrence: busy parents call from their car and try to discipline recalcitrant teens, multi-faceted business deals sour over the phone, and political disagreements turn vitriolic.

When drivers acquire hands-free phones, they want to brush away the risk. Existing laws do not help, because they primarily regulate manual distraction and visual distraction, specifically holding a smartphone or texting and driving. There is no law that prohibits using hands-free smartphones, except among teens and novice drivers.  Cognitive Distraction is the optical illusion that we ignore at, our own risk.

The driver who talks… …but has his mind elsewhere faces trouble: first, he/she is more likely to “visually tunnel”- he tunes out more signs and signals in the environment; it might be as straightforward as missing speed-limit signage, or as deadly as blowing through a traffic signal.

Second, the distracted driver has a slower reaction time. Researcher David Strayer, at the University of Utah, finds, at the maximum, that a driver traveling only 25 mph continues to be distracted for up to 27 second after disconnecting from a highly distracting phone call or a car-voice command system. The vehicle would cover the length of three football fields before the driver regained full attention.

It is human nature to talk and to drive… we have, collectively, been chatting for nearly 100 years old, since the beginning of motoring.  However, it a relatively new capability to drive, and to talk virtually. The differences are that we converse with someone who is not present and we are not stationary. This is an entirely new phenomenon with unmeasured risk. We tell ourselves that it is natural, but like the optical illusion, hands-free smartphones warrant a second look during “National Distracted Driving Month” and beyond.